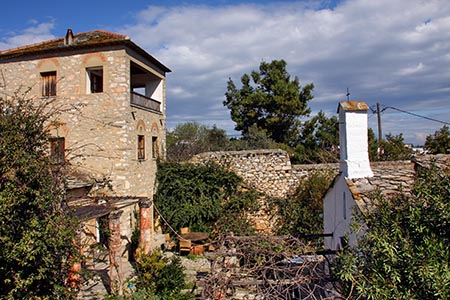 The Diocese of Skopelos Island is an impressive Venetian building located 2kilometersto the south of Skopelos town. The Diocese includes a single-aisled basilica dated from the 16th-17th century, which was built over the ruins of a large church of the Middle Byzantine period (1078 AD); which was, in turn,built on top of an early Christian church built over an ancient temple!

The present-day church is surrounded by an impressive stone quadrangle, which included the wall of an imposing structure, possibly the façade of a bishop’s palace. However, it remained unfinished because of the pirate raid by Ottoman corsair Hayredd in Barbarossa in 1538.

In 1949, it was purchased by the Dimitriades brothers, who carried out excavation works under the supervision of Professor A. Xyggopoulos. The excavationuncovered many ancient findings, now exhibited all around the area of thediocese. The feast day of the church is on the 23rd of August. On the eve of the feast of the Diocese, the all-night vigil ritual is scrupulously observed, followed by the celebration the next day.